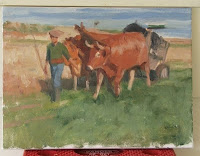 I started this in Day2 of the workshop after a couple of Ned's demos. But I couldn't get the oxen's proportion right as well as the colors of the man leading them. Frustrated. Then Ned comes in and brought it to this level.
Since the body of the front oxen was too thick(high), he made its legs longer to match. He didn't move the man toward left, which is the actual position of the man relative to oxens. Instead he made the man taller, especially his legs longer. Needless to say, he made lots of adjustment for colors and values at the same time.
Now this looks very good.


After the afternoon session, he provided a long demo (about an hour and a half) for portrait painting. 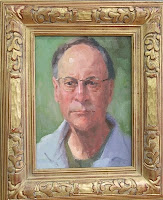 This is Steve, husband of the owner of Whidbey Island Fine Art Studio, Cary. Because the best model on the island (?), a younger woman, was not available at that time. Even though Steve's face was actually a little bit shorter (or wider), he captured the character of his face really well. He avoided painting a couple of major winkles intentionally, which made his face much younger (I think he's older than me). At the end, he got a little tired and the glasses are not in proportion between left and right (he admitted that next day). But it's still a great portrait without any doubts.
Posted by ToshiE at 2:28 PM