Well, I didn't plan to update for this piece any more. But I had to. Because this is the first time curving background sky into trees worked as I intended. I've probably overdone that though. I realized I spent more than an hour forgetting how much time has passed tonight. Originally it was too dark. I made the trees much lighter because they're further back. I think the values are about right now.

I'll work on the foreground further and enhance cow's bodies a little bit then call it done.
Posted by ToshiE at 10:37 PM No comments:

This would be the last update before finishing this piece. Spent some time to fill foreground. I wanted to show spiky frozen grass stems. I haven't decided what to do with the background sky. Currently the sky colors are smeared with reddish tree colors, which was done at a very early stage. But at the same time, I don't want to eliminate soft edges between trees and sky.

I also want to put some more highlight colors on the cows as the final touches. But otherwise I'm so far satisfied with this painting.
Posted by ToshiE at 8:47 PM No comments:

This would be the last update of this painting before finishing. I started working on highlighted areas and cutting into rock shapes. I need to be careful not to make too light for too much areas. I think I need to make three color values 1) light snow area, 2) dark shadowed snow area, and 3) rocks. And gradually reduce the value range among them while I work from top of the mountains toward the bottom. Then it would be done.
Posted by ToshiE at 11:13 PM No comments:

Surprisingly quickly getting closer to finish

Even though I didn't much time on this, it's surprisingly quickly getting to the final stage. I still couldn't decide how cool the shadow white part needs to be, and the mid to foreground pasture is a little too light value-wise. Otherwise I don't think I can improve this much more. Likely one more update then finish this piece.

Again, the composition was the key from the beginning.
Posted by ToshiE at 11:11 PM No comments:

Mid-range is getting closer to the final values

I mixed a batch of  purplish gray at the beginning. From there I gradually lightened and warmed up the gray by mixing more red and orange, then applied it to the mid-range. Now the values are about what I want them to be.
Posted by ToshiE at 11:04 PM No comments:

I moved front legs of the left cow forward to show movement. At the same time, started shaping the face of the right cow. They're almost good. Also putting more texture in the background pasture. And gradually working toward the foreground.
Posted by ToshiE at 11:24 PM No comments:

Sky and Foreground values are about right

As I wrote last time for this painting, I adjusted values of sky and foreground. They seem to be about right. Now I need to work on a band of midground hazy shadowy area. My strategy would be mixing lots of purplish gray and shifting values a little darker and lighter from the mixed gray. I need to do it all at once.
Posted by ToshiE at 3:53 PM No comments: 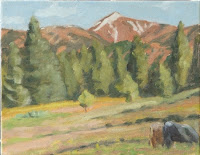 Yesterday afternoon, I made a decision to stay at Cle Elum and paint in Teanaway Valley this morning. Mainly because I couldn't find a good spot to paint in early morning around Everett. When I rode on to Teanaway Rd from SR-970, I immediately knew I could paint anywhere along the load. I've chosen this area because Ned Mueller send out email with beautiful photos about a month ago. The mountain is Earl Peak, which Ned also painted from the same angle but a little further away. In his painting the peak was completely covered by snow. Now I only could see some patches.

In the middle of two hour session, a bunch of cows were rushing toward me. Later I figured a big cube of salt was placed only a couple of dozen yards away  from the spot I was painting. They came to lick it, which I quickly put in the canvas. The mountains became a little too red and I should have make the trees darker. But overall it's not too bad. I need keep trying.
Posted by ToshiE at 10:33 PM No comments: