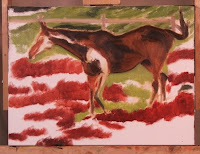 Before filling out the body of the horse, I started curving out the outline in this early stage. Since every part is relative to the others if I adjust the outline later, the shapes inside of it might need to move around. I just wanted to minimize those before start working on the details inside the body.

The angle and size of the head would be crucial for this painting, which I haven't gotten right.
Posted by ToshiE at 10:19 PM No comments:

Second Plein Air of this summer 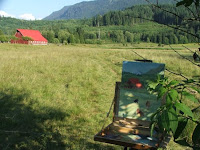 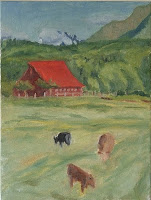 I went to the same area along SR-530 again yesterday. It's just about 6 miles east from the spot I painted last time. This time I found a good shade so the colors are a little better than last one. I think I made good greens for the hills behind the barn. I didn't spend much time to finish the foreground pasture. I put some cattle in, which I saw around the pasture. I took a lot of photos of cattle so that I can paint some separately later.

Another challenge was the cloud covered mountains with some snow in the background. Not too bad for the first attempt. I need to check the name of the peak before painting in a larger format. I might use the name for the title. I'll keep going SR-530 this summer.
Posted by ToshiE at 3:26 PM No comments:

As usual I worked on this piece too long and it started losing consistency of colors. From here I would add just a little more contrast for the shadow of sagebrush. But that's all about it. Then I'll call it done. Probably I should have made this canvas a little smaller. Because not so much variety of objects in this painting. As the result I needed to paint much more details of sagebrush than I wanted to do. Next time I'll consider this aspect more carefully when I decide the composition.
Posted by ToshiE at 3:18 PM No comments: 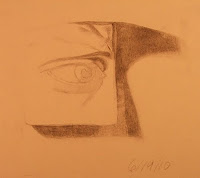 Today was the last day for the class at Gage Academy. All first quarter students have been working on the final project through last three Saturdays. This is my outcome. The big cast shadow was done Friday night. Today I worked on rendering on the top right corner of the cast. As the instructor Susan Bari Price pointed out, I tend to make all shadow part too dark even at early stages, which causes me to end up erasing a lot. I think I just don't get used to the way drawing works: you can only add values, you can't subtract. I'm so used to "blocking" with the darkest dark value at the beginning of oil painting. In oil painting, you can make it lighter relatively easily but can't put darker colors on wet light colors. You need to wait until the surface dries up. So you need to start from darker. It's opposite from drawing or watercolor.

Even though this piece is unfinished I'm somewhat satisfied with how this drawing turned out as well as what I've leaned throughout last 9 Saturdays. I might take another class or workshop at Gage. But not many options for night classes or weekend workshops unfortunately.
Posted by ToshiE at 10:06 PM No comments: 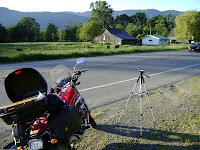 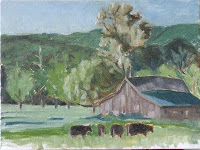 I forgot to take a photo of the set-up with my motorcycle before putting the wet canvas into the top case secured by a specially-made wood-framed carrier, which was designed holding a 16"x12" stretched canvas and perfectly fits in the top case of the motorcycle. So you can see only top part of my pochard box sitting on top of the carrier in the photo.

Anyhow, it was along SR-530, probably about 10miles east from Arlington, WA. I arrived there about 6PM Saturday and spent 2 hours until 8PM. As you can see, sun was sill up when I left there. I should have taken my sun glasses off. But I needed to set the pochard box against the sun to put the canvas and palette in shadow and sunshine was directly hitting my face.  So I couldn't re-create subtle tone changes in green as well as I wanted. I'll look for a folding umbrella with a crimp by next time. My painting umbrella is too long to attach to my motorcycle.

The cattle were not there when I set stuff up. Right after I started drawing the barn and trees, they showed up. I quickly put them on the canvas before they were gone. I now think the tallest tree aligned to the barn is kind of awkward. I'll likely move it  toward right when I work on the studio version next.

For those two hours, I felt I was really into it. I guess it was because of the long drought.
Posted by ToshiE at 8:26 PM No comments:

A horse is walking down 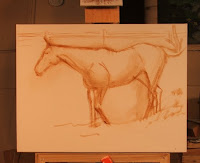 Due to the class at Gage on Saturdays, my weekends are really short and hadn't had time to go out to paint outside to study potential next landscape pieces in studio. Basically I ran out of study&color-thumbnail paintings after the "Umtunam Ridge".  I need to have a long stretch of en plein air streak this summer after the class is over.
Meanwhile I decided painting another horse from a photo that I recently took at North Bend. I drew it on 15"X20" canvas. I still needed to erase some part a couple of time to get the proportion right (sigh).
Posted by ToshiE at 10:46 PM 1 comment: