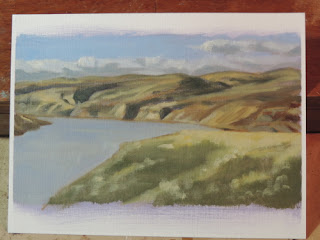 I went to an year-end short vacation and stayed at Dayton, WA, for three nights. After I discovered my old ski boots were chipping away piece by piece at the bottom on the second day at The Bluewood Ski Area, I gave up the skiing option and drove out under lower twenties in temp to find sun shine and a little warmth to paint outside on the new year's day, which I luckily found while driving north then east along Snake River. Penawawa Canyon I drove through to get the reiver side was very scenic with some cows grazing around but totally in shadow of southern hills so decided to set my easel along the river.

I should have spend more time to work on the details on the foreground, which should have move value contrast than the background. But the temp started dropping again after I spent 1.5 hours. I think I successfully captured features of great hills in the back as well as a band of low clouds covering entire SW from the spot.
Posted by ToshiE at 8:50 PM No comments: