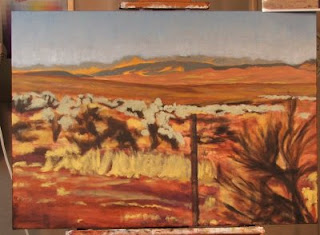 After shaping outlines of mountains, I put local colors for the sky. Then tried putting some foreground grass colors, which I found too early. Instead I started coloring sagebrush. At this moment, I'm cautious not to make those too light.
Posted by ToshiE at 11:49 AM No comments:

Some modifications to Proto-type 1

Even though I cleared snow from the side walk this morning, a couple of inches of new snow is already on the ground before getting dark and it's still snowing outside.
Anyhow, I worked on the prototype this weekend and I guess I'm done with it for now. I got two of simple hinge supports on the internet and connected them together to make it adjustable. Now it opens as wide as 105 degrees or less. Then I did some wood work to shape a piece to slide into the space under the top plate of the tripod. It's tight. But the box still swings when I tap the edge downward. It's better than before though. The legs of the tripod are not strong enough and as the result they warp as I tap the box. I think this is all I can expect from a $28 tripod. I might attach some metal pieces to keep the box closed for transportation. But otherwise I'm reasonably satisfied with the outcome of this prototype 1. Total material cost was, I think, about $60-70. I'll use this for plein air painting for a while until I come up with a new idea.
Posted by ToshiE at 8:04 PM No comments: 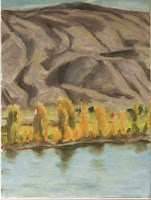 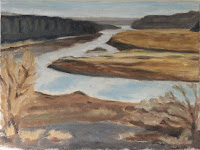 The first one was painted on 10/26 (see the blog on the day) along Columbia River near Rocky Reach Dam with my french easel. Then the second one was painted near Quincy with the prototype easel on 12/6. It's getting better with dark&light contrast.
Posted by ToshiE at 2:35 PM No comments: 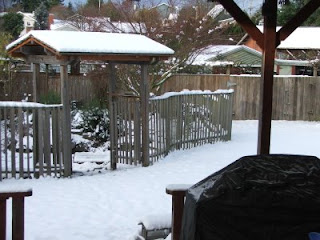 Snow in this time of the year may be normal to many of you. But not for Seattleans. Probably about an inch or two of snow is on the ground this morning. Even though we had a white Chrismas Eve last year, this is not usual for us to have snow on the ground in the middle of December. We have no snow on the ground at all for some years.

Whatever, we'll just enjoy one of spectacular shows that mother nature brings us.
Posted by ToshiE at 9:29 AM No comments: 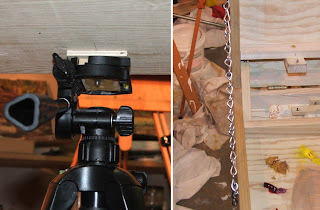 Last Saturday, I drove east with the prototype tripod easel and got to Columbia river near Quincy. I spent about an hour and a half there for painting. I'll post the painting later but I want to write about the easel today. It worked almost as I expected except for two issues.
The first issue was stableness or firmness of the box while I'm painting. It's reasonably acceptable but I felt a little weakness when I pushed my brushes against a 16"x12" stretched canvas. Especially when I was painting away from the center toward the right edge. The main cause seems to be the structure of the platform at the top of the tripod. It's a sort of "C" shaped mechanism to let it lean up to 90 degrees toward left as you can see in the photo on the left. It definitely makes me easier to mount the box though. I may be able to find another one that is more steady. But it would be expensive. Instead, I'll try putting a piece of wood underneath of the platform to support the top plate.
The second issue was the supporting mechanism of top half of the box (picture on the right). The chanin worked fine to ajust the angle and support it not to open too wide. The problem was with the wood stick to support it not to fold down. Basically it's not adjustable. I tried tacking it between two cross-supporting wood as in the pic. Didn't work well. After I came back home, I ordered a set of metalic hinge support on-line because I coudn't find a simple one I needed at any hardware shops, like Home Depot. I'll try attaching them to replace the chain and the wood sticks.
After these adjustments, I'll try this again at somewhere.
Posted by ToshiE at 9:07 PM No comments:

I finished the first prototype of the field tripod easel. 6 lb (My french easel is 10 lb). About 16"x13"x3.5" for the box part. The tripod is a cheap one and may be a little too weak. I need to put this to the test. 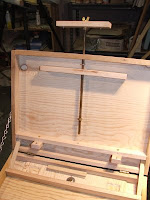 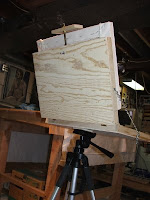 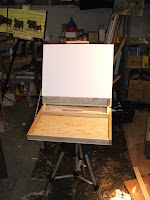 By remembering the problem with "Animal Trail", I pushed the dark part further. With this base, I hope I won't be lost in value differences between lighter colors. I can always compare it with darker values. Now I can directly try making local colors.
Posted by ToshiE at 10:08 PM No comments: