Paying attention to shapes and their edges 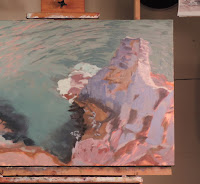 Not a big progress as usual. But defining edges of bigger shapes instead of smearing colors about the area of each shape, which wouldn't help giving myself a feeling of making progress.
Those shapes are probably way off from the real perspective but I don't care much at this moment.
Some point I have to graduate from that.

It's been a while since last update 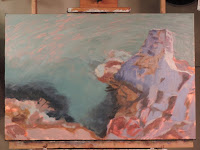 It's been a while since last update for this Cape Falcon painting. But finally I came back to this today and focused on making the darkest/darker part properly dark.
The left side is still too dark but I'll push it down soon.
Posted by ToshiE at 9:31 PM No comments:

Painted on the beach at Roads End, OR 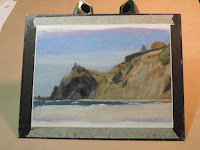 It's been almost 6 months since the last update. I don't have any excuse for that but simply didn't paint at all. I haven't given up painting by no means though.

I had one week vacation staying at Newport then Lincoln City, OR, after stopping by Portland. Friday, I visited a coop gallery in Lincoln City, chatted with two local member artists, then checked the next door, Lincoln City Cultural Center, where two shows were going on. I pleased with the fact that there are some art communities there. After those I went down to Taft neighborhood where I found two different glass art making classes at two different places: one for blowing and another for fusing. I didn't know glass arts are a big thing there.

In late afternoon, when the sun leans to the west, I painted on the beach at Roads End neighborhood looking toward Roads End Point at the north end of the city. The simple subject matter helped me somewhat finishing it in an hour or so. I felt good by considering a long time absence after I painted last time.

Onshore wind were blowing hard and sands are all over my gear as well as on canvas. But I think I got the value contrast as I wanted. That's what I've been thinking, while not painting quite some time, I wanted to focus on. I think that's the only way I can get back on painting actively.
Posted by ToshiE at 8:25 PM No comments: 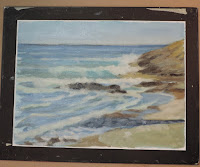 I went to Oregon Coast for vacation and made one painting at where Bob Creek meets Pacific Ocean, 6 mil south from Yachats, on my way up to Newport that morning. It was a little above freezing and windy. When I was setting up my easel at the parking lots a surfer went past me and paddled out to the ocean.
This was the first plein air of 2019. It took me just about an hour since the composition was simple. I wished I could have added more sharp edges here and there.
Posted by ToshiE at 3:01 PM No comments: