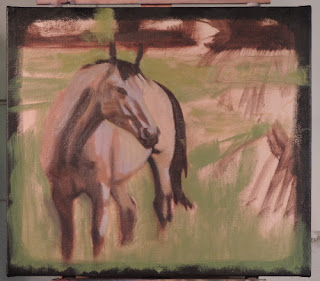 After finished Mount Logan, I came back to this horse but felt something is not right on the head shape. I'm still adjusting it.
Posted by ToshiE at 10:08 PM No comments: 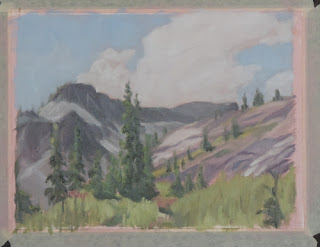 I was thinking painting at Nooksack Falls this morning but I realized there is almost no space to set an easel and most of the falls were in shadow in the morning. So instead I kept assending along 542 and passed the base of Mount Baker Ski Area, where Mt. Shuksan is overwhelmingly occupying the scene.
I looked away from Mt. Shuksan and looked toward Mt. Baker's direction (SW) and painted Table Mountain.
Since my onsite paintings tend to be darker, I kept thinking making shadows lighter, which worked for the mountain, but made a mistake and lost value contrast in mid-foreground, which I needed to make shadow much darker.
The bright side was the cloud in the background is almost exactly what I wanted it to be.
Posted by ToshiE at 10:48 PM No comments:

2nd update of the day...and the last of this piece 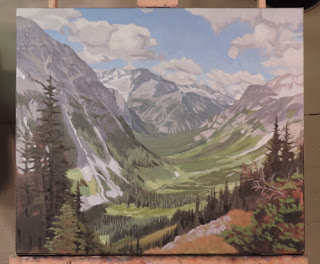 Although the foreground (right side) is almost untouched quite some time and many areas need to be retouched to complete, I can see how I can finish this pieces now.

When I look back how I got here, the key was the values of the main subject far back. I think that part dectated the entire value coordination of this painting.
Posted by ToshiE at 10:19 PM No comments: Well it's much better purple but still kind of purple. But the key now is not the colors but values. I need to make the sun-lit part more shine. To do that the contrast between highlight and shadow need to be more recognizable. I'll push that next.
Posted by ToshiE at 2:11 PM No comments:

Refined the valley and the right side 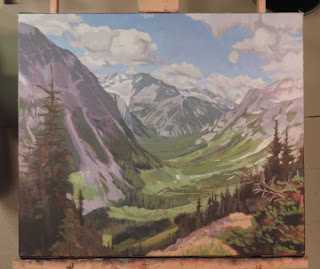 Green shapes, values and colors in the vally area. Also put the close-to-final colors on the ridge on the right side. Before working on the left ridge, I wanted to put more colors and values in the fron right. Now I'm ready to make the purple on the left fade away, which is ruining the entire painting's color contrast.

Also, while I was hiking around yesterday I decided finishing this piece in this month.
Posted by ToshiE at 10:45 PM No comments: